Why you need survival weapons

Survival weapons are a necessity when it comes to camping, nature hikes, practicing bush craft, hunting or even prepping for an apocalyptic catastrophe to occur. There are several different types of weapons, and reasons as to why you should maintain and possess a quality amount of them. With pistols and rifles, though effective for hunting and self defense, you come into a problem of limited use if you do not have the ability or know how to create your own ammo. They are also very loud if you don’t want to give away your position. 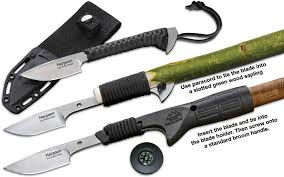 A knife should be considered a must-have survival tool. Carrying at least one knife, and probably more, is a given in any survival situation. Knives are the single most versatile “multi tool” you can have. With a knife you can make other tools and DIY weapons, build a shelter, build a fire, procure food, make clothing, open a can of beans and defend yourself. You can even just whittle away the time when you’re bored waiting for the rain to stop.

A mid-sized fixed blade knife and a folding pocket knife are the knife style you should be carrying. Folding knives aren’t as sturdy as fixed blade knives, but their compactness makes them easy to stow away until needed. Knives are generally lightweight enough that you can easily carry more than one.
survival weapons

You’ll also probably want to carry a sharpening stone with you in order to keep your knife edge keen. The sheath you choose for your fixed blade knife can also be a source of additional survival tools. For instance, you can have a knife sheath made that’ll also hold a fire steel, a whetstone, a compass and any other tidbits you might find useful in a survival situation. Bush craft knives and their attendant multipurpose sheaths are a great option to consider. 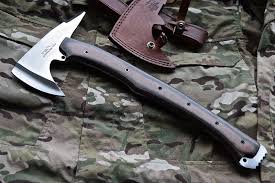 The benefit of carrying a hatchet is that it’s both a functional tool and a self-defense weapon. A hatchet or stout tomahawk can be used to chop wood or small trees, carve a spear, clear brush and more. It can also put a little more distance between you and a would-be attacker or dangerous animal in close quarters should you need to employ it in that regard.

In a survival scenario, I would definitely want to carry a knife and a hatchet. If you’re able, you should also consider carrying a small file with you to touch up the edge of your hatchet when necessary.

If you can comfortably carry or stow an actual, full-length ax, all the better. The weight of carrying such a tool may be prohibitive, however. You can do a lot more with an ax that might unduly tax a hatchet, but a good, sharp hatchet is a great choice. It’s relatively lightweight and can perform multiple tasks with ease.

A slingshot is a great survival weapon. It’s small, lightweight and it can shoot almost any rock or pebble you can find on the ground. You will, however, probably want to carry a supply of round steel balls or marbles to use for ammunition. But once you run out, you have an endless ammunition all around you. 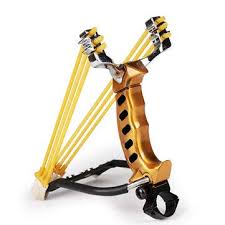 It isn’t too difficult to become skilled and accurate when firing a slingshot. You can effectively kill small game and birds with this weapon.

In my opinion, a slingshot is one of the best survival weapons you can have. You should always carry an extra set of surgical rubber bands, though.

A sling, on the other hand, is comprised of a couple of lengths of string, rope or leather with a pouch tied in between them. A projectile such as a stone is placed in the pouch. The sling is then swung or twirled in an arc before releasing one of the lines, and thus firing the projectile toward its intended target.

Slings can be purchased but are easily crafted. They can be highly effective as both a combat weapon and a hunting weapon.The trouble with them, in my opinion, is that they require an inordinate amount of skill to use effectively. Go with the slingshot.

Crossbow or bow and arrow

My favorite weapon, and another that has withstood the test of time, the traditional bow and arrow is a dual purpose weapon, excellent for hunting and self defense. However, this survival weapon will take lots of practice to be effective, so whether you decide to make your own long bow or buy one, be sure to go out every day and shoot a few straw bales.

Also keep I mind that this is a weapon primarily designed for long range defense, not close quarters combat. With that limitation in mind, always be sure to keep something for close combat (like that awesome club you just made) nearby, so you’re not caught unarmed, or forced to try and shoot a rapidly advancing target.

Though bow making is a highly skilled profession with many technical facets, in a survival scenario it’s perfectly feasible to construct your own in the wilderness. Just make sure you have a sharp knife, and something very strong for the string. 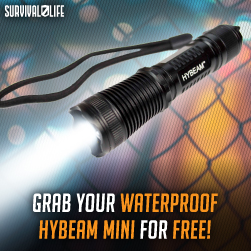 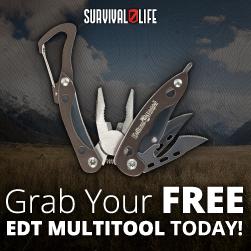